The ATTOlab facility comprises three nearby sites in the Paris-Saclay University – see Figure 1 :

CEA-l’Orme-les-merisiers: two lights sources and associated endstations are dedicated to ultrafast studies in the gas phase and the solid state. They are operated by the ATTOLab partners under coordination of the Laboratory Interactions, Dynamics and Lasers (LIDyL) of CEA-CNRS

Palaiseau, Laboratoire d’Optique Appliquée (LOA) : one light source and associated endstations are dedicated to ultrafast studies in plasmas. They are operated by the LOA of CNRS-ENSTA-Ecole Polytechnique.

Palaiseau, Laboratoire Charles Fabry (LCF): the ATTOCeMOX platform is dedicated to the fabrication of XUV optics for attosecond physics. It is operated by the LCF of Institut d’Optique Graduate School.

CEA-l’Orme-les-merisiers site is a 600 m2 experimental space dedicated to gas phase and solid state studies. It hosts two Femtosecond-Attosecond Beamlines FAB1 and FAB10, each including an IR femtosecond laser and a HHG-based attosecond XUV source, respectively at 1 kHz and 10 kHz repetition rates, coupled to experimental endstations.

In FAB1-FAB10, the laser system has been developed by the industrial Amplitude Technologies in partnership with LIDyL. It is based on Ti:S and CPA technology in a “dual” architecture : i) common frontend at 10 kHz (CEP stabilized oscillator+stretcher+regen amplifier), ii) two parallel amplifying stages (cryo-cooled multipass amplifier + compressor), respectively, at 1 kHz and 10 kHz, conserving CEP control [Gobert11, Hergott11] :

In addition to the standard mode of operation (23 fs, 15 mJ@1 kHz and 2 mJ@10 kHz), specific characteristics are achievable. For instance, pulse duration down to 17 fs is possible with reduced energy. Tunability in the 760-840 nm range has been demonstrated at low energy with 50 to 100 fs pulse duration depending on the spectral shape and width (Δλ~30 -40 nm). Finally, post-compression of the 24 fs pulses down to 5 fs in a gas-filled hollow core fiber is pursued on the FAB1 laser.

RABBIT spectroscopy is currently used in ATTOlab. It aims at characterizing the temporal/spectral structure of an ultrashort – attosecond - pulse of light E(t) in the XUV spectral range. RABBIT may be viewed as a variant of the generic FROG techniques (“Frequency-Resolved Optical Gating”, http://frog.gatech.edu/).

To analyze E(t), FROG first combines it with an “optical gate” g(t-τ) – usually another light pulse – delayed by the delay τ with respect to E(t), and second takes the spectrum S(ω,τ) of the E(t)g(t-τ) signal, where ω is the frequency (spectral variable). From the so-called “spectrogram” S(ω,τ), FROG can fully retrieve both pulses E(t) and g(t).

Figure 3 : RABBIT spectrogram S(ω,τ) measured on the Attosecond Beamline SE1. The S(ω,τ) signal corresponds to photoelectrons produced by photoionization of a rare gas by combined XUV attosecond and IR laser pulses, relatively delayed by the delay τ. From the spectrogram, RABBIT can retrieve the spectral amplitude and phase of the attosecond pulses. RABBIT [Mairesse03] and FROG-CRAB [Mairesse05] are FROG-type techniques and powerful tools for nonlinear harmonic spectroscopy.

The gas phase endstation comprises three setups combining gas targets and three types of electron/ion spectrometers. They are operated by the ISMO, LFP, SOLEIL and LIDyL partners on both FAB1 and FAB10, between which they can be permuted. They are accessible to external users: 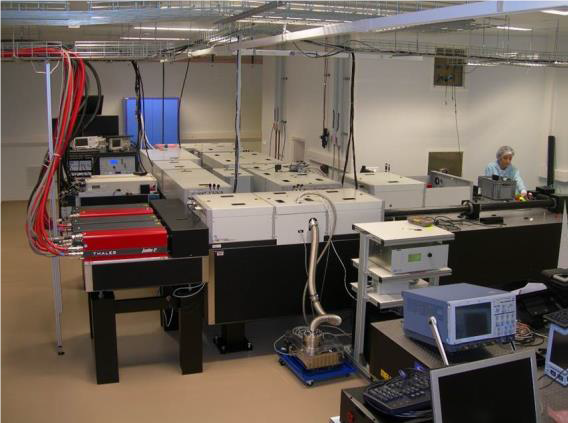 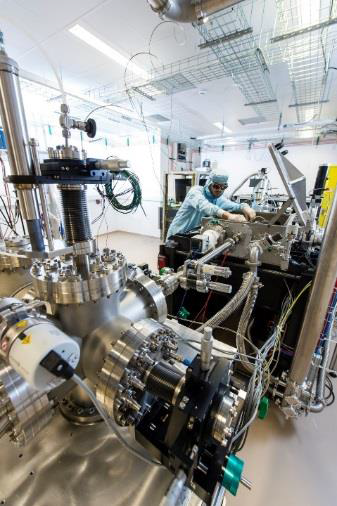 Figure 6 : Experimental room SE1 before/after installation of the attosecond beamline. A 2m-long magnetic bottle electron spectrometer (in the foreground) is supplied with the attosecond XUV light produced with the 1-kHz 15-mJ FAB 1 laser. Figure 7 : : Experimental room SE10 before/after installation of the attosecond beamline. A COLTRIMS (ISMO), visible on the right, is supplied with the attosecond XUV light produced with the FAB10 laser at 10 kHz reprate.

FABP is dedicated to multi-dimensional, high-resolution spatiotemporal imaging of plasma UFD. It integrates (CEP-controlled, 3 mJ, 20fs, 1 kHz) laser already operated at LOA – which will be upgraded to a fully controlled (CEP and temporal contrast) 5mJ, 5fs system in 2012 (already funded) – and a new plasma endstation. The latter houses:

i) installation of a new clean room (class ISO 7) at LCFIO (Palaiseau);

iii) transfer of CEMOX from the present location in Orsay to the new clean room at LCFIO.

The three femtosecond-attosecond beamlines and endstations – for gas phase and solid state applications at CEA/l’Orme-les-merisiers, for plasma applications at LOA/Palaiseau – will be exploited according to the provisional time-breaking: 60% beamtime for studies by the nine ATTOlab partners and their collaborators, 20% for external users, 20% for R&D and maintenance.

The access of external users will be opened through a yearly Call for projects and assessment by an external Program Committee. Beamtime allocation will be also possible: